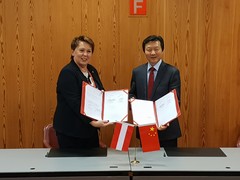 At the same time, SAC appointed Austrian Standards' Director Elisabeth Stampfl-Blaha "Strategic Advisor". The grounds cited by SAC were her profound and long-standing experience as well as her "significant influence in the field of international standardization". Stampfl-Blaha served as Vice President Technical Management of ISO from 2012 to 2016 and previously, as a member of the ISO Council. In recent years, China has considerably expanded its activities in international standardization within the framework of ISO and considers standardization to form part of its global economic expansion strategy. With regard to participation in technical committees of ISO, China already ranks third (after Germany and the United Kingdom) and with regard to TC management, the country has reached rank 6, catching up with France and Japan. The preparation and development of standardization strategies as well as the most recent global standardization policy will be discussed at a conference in Beijing on 28 November 2018. In this setting, Stampfl-Blaha will hold a keynote address informing, for example, on how standards support the development of SMEs: "As a typical SME country, Austria can contribute very much experience here," believes the Director of Austrian Standards.

As of recently, Austrian Standards is also represented by Director Elisabeth Stampfl-Blaha on the new curatorship of the Austrian Chinese Business Association (ACBA). The president of ACBA that was founded in 2010 to actively promote an improvement of economic relations and cultural exchange is Prof. Dr. Georg Zanger. The curatorship set up now is headed by former Federal Chancellor Christian Kern (President) as well as Infrastructure and Innovation Minister Norbert Hofer and Carinthia's Governor Peter Kaiser (Vice Presidents).

Stampfl-Blaha: "We view the strengthening of our relations to China as a significant contribution to increasing the opportunities for Austrian enterprises and to reinforcing our positioning as a partner for standardization and innovation."