From algae to technologies of the future: Austrian Standards honours domestic companies for the development and application of innovative and practice-oriented standards for the fifth time 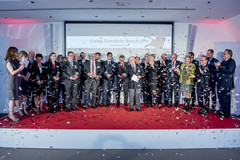 Presentation of the Living Standards Awards 2019

On 24 January 2019 Austrian Standards presented the Living Standards Award to five enterprises which successfully contribute to shaping promising global markets by applying and co-developing innovative standards in a targeted way. Many of the projects submitted address solutions for the most important challenges of modern society, such as the ageing society, sustainable raw materials for energy production, artificial intelligence, Industry 4.0 and Internet of Things.

The broad spectrum of topics covered by this year's award winners ranges from standardized algal oil production to "sensitive" industrial robots and safe baby soothers. As every year, the Awards were presented at the New Year's reception of Austrian Standards. For the first time, the Living Standards Award also featured a special category presented by GS1 Austria this year.

The Styrian plant engineering company BDI-BioEnergy International specializes in the development of resource-saving technologies. The idea of using algae in industry is gaining ground in the sector. The problem is that this requires that the production of high-quality algae biomass is site-independent and, above all, constant.

BDI now succeeded in developing a special algae cultivation system that guarantees that precisely those requirements are met. To ensure that this process can be used internationally, the company headquartered in Raab-Grambach (Styria) currently participates in the development of the European standards that will assure quality control regarding the purity and concentration of algal oil for customers in future.

For its contributions to the development of standards on the use of algae in industry BDI-BioEnergy received the Living Standards Award of Austrian Standards.

The collaboration of humans and robots is an important issue in Industry 4.0. However, the use of advanced technology harbours high risks in operations so that stringent safety standards need to be complied with in order to protect employees. In practice, for example, safety guards ensure that there is an adequate safety distance between humans and machines. This results in high space requirements and even higher costs. As a consequence, there is great demand for collaborative robotic solutions.

To make it possible for humans and robots to collaborate in the same work area even in confined spaces, Blue Danube Robotics developed a safe collision sensor for industrial robots on the basis of the International Standard ISO 13849. AIRSKIN is an artificial skin that is mounted on the robot and whose sensors stop the machine in due time before a potentially dangerous collisions with humans.

Blue Danube Robotics received the Living Standards Award for the innovative application of standards in the field of robotics this year.

The food producer S. Spitz headquartered in Attnang-Puchheim (Upper Austria) uses bar codes throughout the logistics process to ensure the traceability of products at all downstream stages of the value chain - from production and warehousing to logistics providers, retailers and consumers.

To cover also upstream stages, such as the procurement of packaging and raw materials, without system discontinuities in future, S. Spitz participated in the elaboration of a new GS1 standard for a clearly structured supplier manual. Based on the existing GS1 standard, the "Upstream" working group  developed a solution permitting data exchange between suppliers, producer and trade without any system discontinuity. As a result, the processes of S. Spitz can be made significantly more transparent, more efficient and more dynamic and error proneness can be reduced along the entire value chain.

The application of GS1 standards to enhance efficiency considerably while reducing costs impressed the jury of the Living Standards Award.

Solutions for the ageing society

One of the biggest challenges of modern society is the ageing population. According to Statista Germany, the number of people requiring nursing care will increase from 350 million to more than 614 million world-wide within the next 30 years. As people get older, their needs also change. For example, the demand for incontinence products increases.

The paper and textile industries already recognized that early on and searched for an innovative solution. The international machinery manufacturer Voith Paper GmbH & Co.KG now combined the two sectors in one system. Together with the Trützschler company, they developed a machine for incontinence products, a hybrid paper and textile machine so to speak.

For the solution-oriented development of a cross-industry safety standard, the two enterprises received the Living Standards Award from Austrian Standards.

At MAM Babyartikel GmbH headquartered in Vienna, standardization has formed part of corporate DNA for many years. The founder of MAM, Peter Röhrig, already recognized early on that standards critically influence international markets.

To enhance the safety of babies when they suck on soothers - for example, soother chains caused suffocation accidents in the past - Röhrig significantly contributed to the European standard on soothers that is recognized world-wide today. That standard built on an ÖNORM standard that constituted the highest standard in Europe in 1990. Almost thirty years later, MAM is the international market leader in the field of baby products and continues to take the lead in standardization.

MAM's outstanding commitment to national and international standardization won over the jury of the Living Standards Award.

Photo gallery and videos of the Award winners
Photo gallery: Guests of the New Year's reception with the presentation of the Living Standards Award
Photo gallery of the event at the Opinion Leaders Network